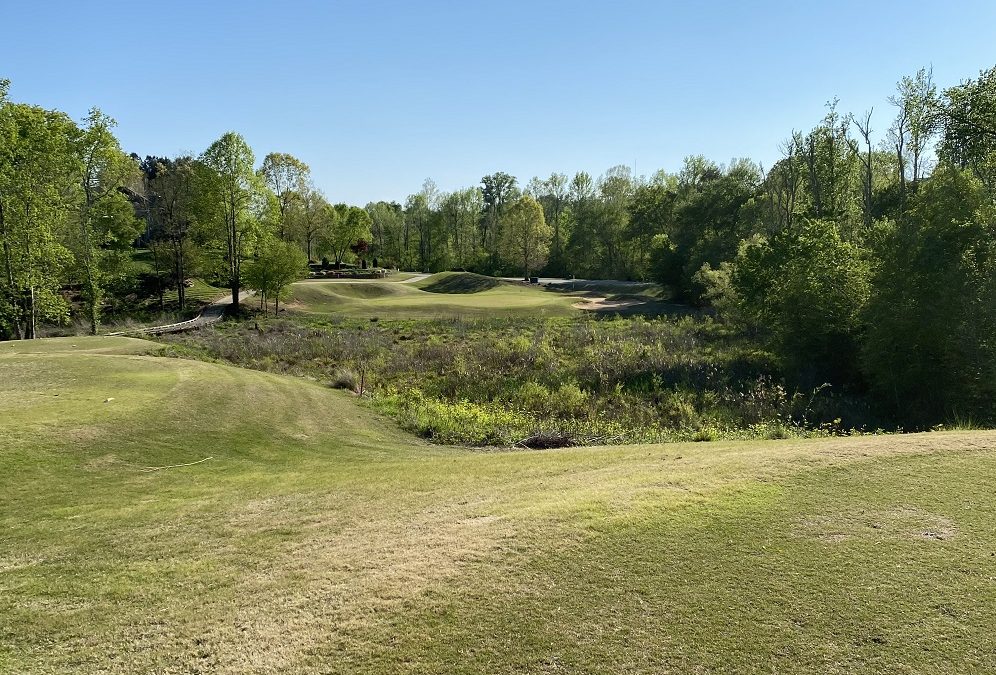 Verdict Ridge is regarded by many as the nicest course available to the public in the Charlotte area.  Located in Denver, NC, it is just on the other side of Lake Norman.  It’s only a 35-minute drive from Charlotte, which isn’t much further from any other course you’ll play.  Verdict Ridge is semi-private, open for members only before 12pm. It could be a bit pricey after that, but regardless, it’ll be worth the round and a good pace of play.  We typically will try to book a 3pm tee time, which is when the rate drops down to $39, any day of the week.  This course will really give you the country club feel from the second you pull into the parking lot.

There’s a nice range that’s included in your round and chipping green on one side of the clubhouse, and another putting green right past the clubhouse.  You will want to get to the course early to putt a few; otherwise, you’ll find yourself in trouble as you approach the green on the 1st hole.

If you’ve never been here before and you’re not playing with someone who has, you will most likely have trouble navigating the course and greens.  It really helps to know where you want to aim your tee shots, and the good spots to hit on the green.  Staying below the hole is vital here as some downhill putts will be nearly impossible to stop.  We’ve seen more 4 putts at this course than anywhere else combined.

The course has a great layout, with some nice houses surrounding it.  There are a lot of elevation changes and some holes you’ll want to aim at the cart paths for the ball to funnel down into the fairway (specifically holes 9 and 14).

We did leave a lot of putts short when we played, which is rare at this course.  They were moving a little slower than usual and they have been in better shape before, but they’re still one of the best in the area.  It’s still early in the year and there was some rain the day before we played, so we’re confident they will soon be back to mid-season form.

If you’re looking for a membership, it’s worth noting they have one of the options around.  For the young executives (under 35 yrs), you would pay $1000 to join, and monthly dues of $235.  They offer a discount for referrals so if multiple join, you could probably get that closer to $200.

If you haven’t played Verdict before, you must to check it out.  Just make sure you bring balls to spare!  We’re sure it won’t be the last time you’re there.

#9 Par 4, 321yds, Handicap 9 – The 9th hole is Verdict’s signature hole, and it’s the first thing you’ll see when teeing off hole #1.  It’s a short par 4, but iron is the smart play.  Take the iron towards the cart path on the left, and the ball should find its way in the middle of the fairway.  If the flag is on the bottom of the ridge, you should have a good look at birdie.  If it’s on the top of the ridge on the backside of the green…GOOD LUCK!  Check out a flyover of the hole below, which can also be found on the Verdict Ridge Website.

#18 Par 5, 515yds, Handicap 4 – This finishing hole is very intimidating off the tee.  With a good tee shot you could have a go at the green, but the landing area is so narrow, it may not even be worth driver for longer hitters.  The risk here is ending up in the fairway bunker on the left or flying it through the fairway into the marsh.  We’ve only seen this green reached in 2 one time, so kudos to you if you’ve done it!  We’d recommend playing it as a 3 shot hole as this makes it play easier. Try not to let this hole ruin your round, as we’ve seen it done many times before. Check out the flyover for this hole below as well, also available on the Verdict Ridge website.

View flyovers and descriptions for every hole at Verdict Ridge by visiting the course’s website here: https://verdictridge.com/course-tour